Once upon a time, kids couldn’t wait to play outdoors, and parents calling their brood home for supper was a familiar sound throughout the neighborhood. But today’s children spend a lot of time indoors, leaving parents worried that their sons and daughters don’t get enough exercise, a legitimate concern considering the rate of obesity among the young in the United States. So the challenge for parents is to find something that will entice children to put down their electronic toys and get off the couch.

If you’ve been thinking that a trampoline might be the solution but you have a few questions, this article will debunk some trampoline myths and give you the answers you need.

Myth #1: Having a trampoline will ruin the grass in my yard.

If you make the decision to buy a trampoline, you’ll need to place it in the proper setting. You may need to dig a trench so that the trampoline is level. You want to place your trampoline where there aren’t any trees. Not only could roots be a problem, but so could tree branches. You don’t want your trampoline to be near other structures. But the trampoline can be the centerpiece for a unique outdoor family recreation area, and with lawn chairs placed in the vicinity, you can supervise your children’s play while you relax.

Children are adventurous. It’s up to adults to make sure that the toys they play with and the equipment they play on are well maintained and safe. According to the Centers for Disease Control and Prevention, an estimated 200,000 children, ages 14 and younger, suffer from injuries that occurred on playgrounds. But no one is suggesting that children should be banned from playing in public parks and playgrounds. The same commonsense applies to trampolines, which can easily be made safe as long as adults take necessary precautions. You can buy a trampoline that has safety pads on the steel frame and the springs, as well as add safety material so that the trampoline absorbs impact.

By regularly checking your trampoline for tears or abrasions that can compromise the integrity of the equipment, you reduce the danger. In addition to safety rules, another feature can make your trampoline less of a risk. The Consumer Product Safety Commission recommends buying a trampoline with a safety enclosure, which surrounds the trampoline and helps to prevent injuries if a child falls. 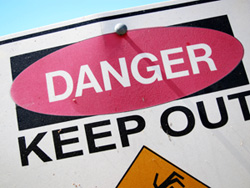 As is the case with everything from bicycles, Legos, cars, and kitchen knives, it’s important for everyone, adults as well as children, to observe basic safety rules so that risk is minimized. Once children began wearing helmets when riding bicycles, the harm was reduced. The same sense of precaution can keep children safe during their trampoline play.

Some rules that will keep children safe include:

By teaching kids to obey these rules, they’ll enjoy their fun more and you’ll be teaching them good habits, which is important. And in the years to come, they’ll hopefully teach these same safety rules to your grandchildren!

Are you too old for exercise? Too old to lose weight? A rebounder can be a great way to build an exercise regimen that improves bone density, strengthens joints and tendons, and improves flexibility.

Myth #5: Insurance policies won’t cover a home with a trampoline.

It’s true that if you plan to add a trampoline to the outdoor equipment in your yard, you will need to notify your insurance agent to find out what your policy allows. That’s also the case if you decide to build a swimming pool or install a hot tub. But the main concern is safety. Your policy may require you to have your trampoline completely enclosed inside a fence that is at least six feet tall and has a self-locking gate so that the trampoline is only in use when you’re there to give the okay.

Myth #6: All trampolines are the same.

The kind of trampoline that you purchase depends on who’s going to use it. If you’re buying a trampoline for the family, you’ll be purchasing a recreational model, which is available in square, rectangular, hexagonal, and octagonal shapes, as well as circular. Sports enthusiasts will be purchasing a competitive trampoline, which comes with a sturdier fabric and coils in order to support the athlete during jumps. Competitive trampolines are rectangular in shape. There’s also the mini-trampoline, or rebounder, which, because of its smaller size, can be used indoors.

Myth #7: Trampolines are just a toy.

Myth #8: I can’t afford a trampoline.

Trampoline prices vary from $200 to $2100 depending on the size, weight capacity, and whether an enclosure is included. Because a trampoline is something that the entire family – from energetic ten-year olds to “I’m bored” teens – can enjoy, it’s an economical purchase, and even Mom and Dad can benefit from the exercise.

A trampoline can resurrect that abandoned New Year’s resolution to live healthier by adding a new dimension to your exercise routine. You say that you don’t have an exercise routine? Well, if you have a trampoline, your “get healthy” plans just got a boost. You can even do jumping jacks on a trampoline.

Myth #10: The trampoline was invented by a circus performer.

There are stories about a man with the last name of du Trampolin, who developed a precursor of the trampoline for use as a circus performer. But there is no documentation to support the legend. The modern trampoline was first made commercially by George Nissen and Larry Griwsold in 1942.

After learning more about trampolines and how they can benefit your family’s health, enhance your activity levels, and entertain adults and kids, you can see why this purchase is the right one to make. It’s hard to resist a trampoline!

Some of the links on this page may contain affiliate links, which means that I'll receive a small commission if you make a purchase using that link – at no extra cost to you. Thanks for your support.